After years of waiting Lil Boosie finally had the opportunity to perform in Louisiana. The Touch Down To Cause Hell Tour stopped in Lafayette,LA at the Cajun Dome on April 19,2014. The atmosphere was amazing! Lil Boosie fans showed up in droves to hear Lil Boosie. Kevin Gates was the first major artist to perform. Kevin did a great show,his energy was amazing. Dressed in a white button down shirt with a bow tie, Kevin enthusiastically rapped his most popular songs. I was disappointed in the crowd response for Kevin. I felt that he was in his home state of Louisiana, the crowd should have shown more love to Kevin. In fact, Z-Ro received more love than Kevin.

Once Boosie hit the stage to perform “Devils” the crowd went crazy. Boosie continued to say how much he love Louisiana. He seemed happy and at peace. After Boosie performed for almost and hour Young Jeezy began to performed. Now I love Jeezy, but he sucked the energy out of the room when he began to perform. It was Boosie’s night and people wanted to hear Boosie. Boosie eventually returned to the stage. The amount of love the crowd showed Boosie was great.

Boosie could have went in tour by himself. He has enough hits to do a three hour show alone. Aside from Lil Wayne, I don’t think another southern artist could headline a show or get that much respect. Boosie has the juice, it’s his time now. People love Boosie like they did Tupac. I found it odd that Webbie was not there for Boosie’s first show back in Louisiana. There is no way that in the Roc-A-Fella days that Dame Dash would not have been there to watch Jay-Z perform in Brooklyn. Aside from Jeezy the other artists did not acknowledge Boosie. Overall, I enjoyed watching Boosie perform. I wish rappers would master the art of performing. There is no need to have 20+ people on the stage. Rappers need to practice performing. Ticket prices are too expensive to have improper sound,or horrible transitions. It’s time to raise the performance bars.. 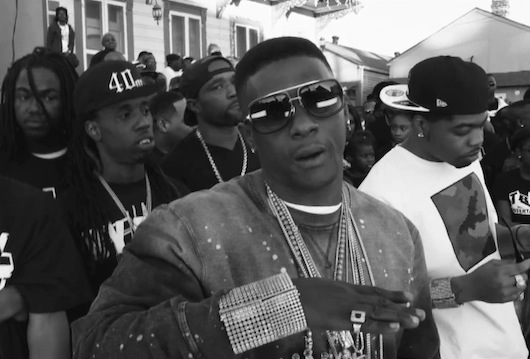